Evocative Objects: Things We Think With (The MIT Press) 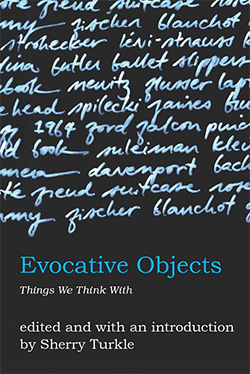 Autobiographical essays, framed by two interpretive essays by the editor, describe the power of an object to evoke emotion and provoke thought: reflections on a cello, a laptop computer, a 1964 Ford Falcon, an apple, a mummy in a museum, and other "things-to-think-with."

For Sherry Turkle, "We think with the objects we love; we love the objects we think with." In Evocative Objects, Turkle collects writings by scientists, humanists, artists, and designers that trace the power of everyday things. These essays reveal objects as emotional and intellectual companions that anchor memory, sustain relationships, and provoke new ideas.These days, scholars show new interest in the importance of the concrete. This volume's special contribution is its focus on everyday riches: the simplest of objects―an apple, a datebook, a laptop computer―are shown to bring philosophy down to earth. The poet contends, "No ideas but in things." The notion of evocative objects goes further: objects carry both ideas and passions. In our relations to things, thought and feeling are inseparable.

Whether it's a student's beloved 1964 Ford Falcon (left behind for a station wagon and motherhood), or a cello that inspires a meditation on fatherhood, the intimate objects in this collection are used to reflect on larger themes―the role of objects in design and play, discipline and desire, history and exchange, mourning and memory, transition and passage, meditation and new vision.In the interest of enriching these connections, Turkle pairs each autobiographical essay with a text from philosophy, history, literature, or theory, creating juxtapositions at once playful and profound. So we have Howard Gardner's keyboards and Lev Vygotsky's hobbyhorses; William Mitchell's Melbourne train and Roland Barthes' pleasures of text; Joseph Cevetello's glucometer and Donna Haraway's cyborgs. Each essay is framed by images that are themselves evocative. Essays by Turkle begin and end the collection, inviting us to look more closely at the everyday objects of our lives, the familiar objects that drive our routines, hold our affections, and open out our world in unexpected ways.

"Original, absorbing, and beautifully written, this collection of essays will forever change the way you look at the objects in your life."
―Helen Epstein, author of Children of the Holocaust and Where She Came From: A Daughter's Search for her Mother's History


"Evocative Objects is a collection of great richness and complexity. Reading these essays transforms one's sense of the most commonplace objects, and prompts us to explore the palimpsest of the past within us."
―Jill Ker Conway, President Emerita, Smith College, author of The Road from Coorain